AKU is an Italian company specializing in footwear built for the mountain. Hiking boots designed in Italy and made in Europe: I like the sound of that! I’m reviewing today the anthracite men’s AKU Alterra GTX hiking boots which sits in the middle of their lineup in the trekking category, below their mountaineering and backpacking … END_OF_DOCUMENT_TOKEN_TO_BE_REPLACED

AKU is an Italian company specializing in footwear built for the mountain. Hiking boots designed in Italy and made in Europe: I like the sound of that!

I’m reviewing today the anthracite men’s AKU Alterra GTX hiking boots which sits in the middle of their lineup in the trekking category, below their mountaineering and backpacking offering but above their more casual “multi-terrain” category. Also, note that Aku makes an Alterra GTX model for women.

The AKU Alterra is the same price as the Salomon Quest and a lower price point compared to our 3 other hiking boots in this comparison. 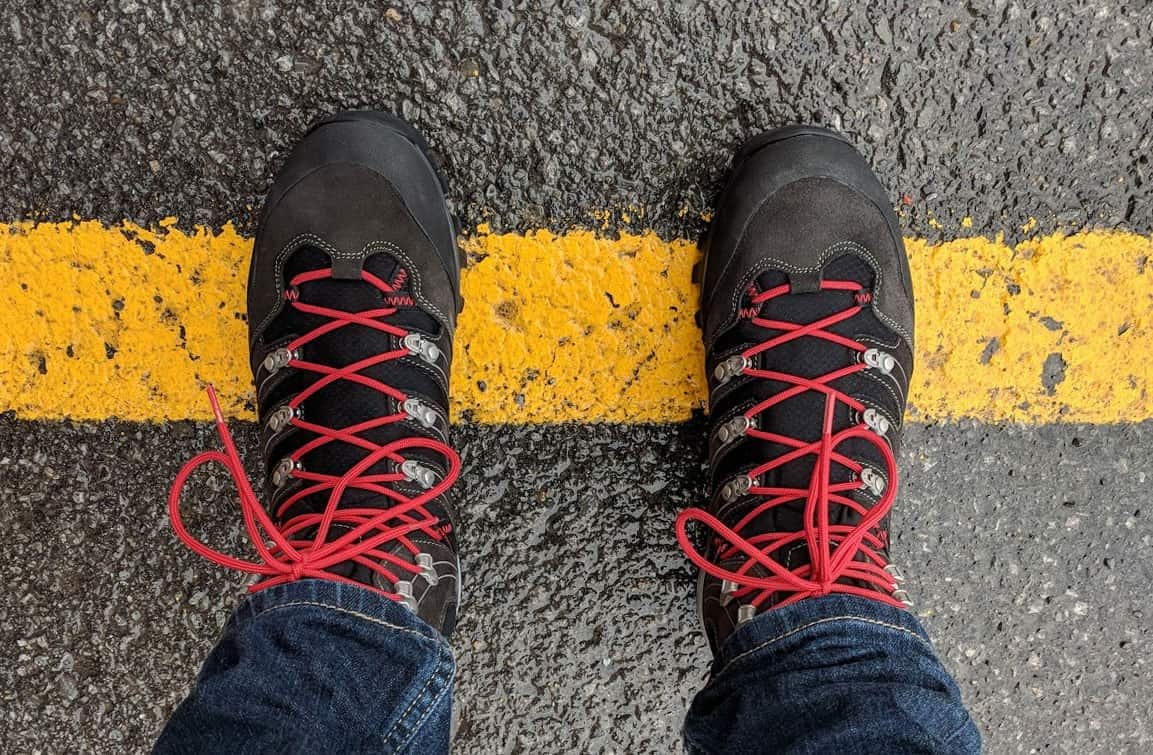 The upper is made out of suede and a stretch fabric with a feel similar to neoprene. The tongue and collar are built in a single piece from this material which makes for a comfortable fit.

The AKU Alterra is lined with Gore-Tex for waterproofing as is most of the competition in this price range – leather lined boots being the exception. It has a Vibram outsole named Octopus and the lacing system is without complaints. The laces are red but also come with extra laces in light grey (similar to the light grey on the side of the sole).

On the tongue, you also get a leather patch with the inscription “Handcrafted by Expert Bookmakers” with a unique number – nice!

The boot weighs 1.75 lbs (size 11) which is the heaviest boot along with the Lowa Vantage in this comparative review. But remember that heavier also means more support & protection.

I have medium to narrow feet but really like footwear with a large toe box. In that regard, the AKU Alterra wasn’t the absolute best fit for me. It’s a relatively wide boot, wider than the Arc’teryx Bora², the Salomon Quest 4D and Lowa Renegade but with a medium toe box similar in size to these 3 narrower boots mentioned.

Really important: you need to size down half a size, these boots are huge! I usually wear 11.5 for everything excepts running shoes for which I go for 12, but for the AKU Alterra, I had to go for 11.

As already mentioned, the stretch fabric for the tongue really helps to make this boot comfy around the ankle. But right out of the box, the arch support doesn’t feel as supportive as the Salomon Quest 4D, as if it’s not quite in the right place, a little bit too far towards the front of the foot. It’s not uncomfortable, far from that, just feels different. I’m sure I won’t notice it after a dozen KM.

With hiking boots, it’s always best to try them first, so I always recommend people to order 2-3 pairs online and keep the best fitting (that’s why we offer the best returns experience at Altitude-Sports.com).

The AKU Alterra GTX is definitely a stiffer boot than your casual all-terrain boot such as the Lowa Renegade. It may not be as stiff as the Lowa Vantage but it’s close. You also get rock solid toe protection which beats all boots in this comparative review

AKU manufactures this Alterra in Romania (part of the European Union) and is backed by a good 2-year warranty.

Trails: The AKU Alterra GTX is perfect for hiking & trekking carrying a medium load. It’s not a lightweight boot but it doesn’t feel overly heavy either. With an aggressive sole and great foot protection, I would have no problem using them on a multi-day backcountry adventure. But if you only do occasional hikes you might want to look for the Lowa Renegade.

City: These boots were made for the country but we know a lot of our customers also use them in the city. If you like the flashy red laces (I do) and the traditional AKU design, you’ll feel great (and invincible) wearing them to work. They’re also easy to put on and off which I like when you’re going out for that late PM cookie snack.

This review is part of our 2018 best selling hiking boot comparison which also includes the:

I’d never heard of Aku, a reputable brand from the Northern part if Italy in Treviso so had no bias to their products. Eager to try the Utah Top GTX Hiking boots out straight away I had to refrain my self from any long periods of time spent in them in order me for to … END_OF_DOCUMENT_TOKEN_TO_BE_REPLACED