With all the information out there, finding the perfect Arc’teryx jacket to meet your needs is a demanding endeavour.

To simplify matters, we’ve created a comparison guide for two of their most beloved lines: Alpha and Beta. Since each of these lines offer a variety of models within their class, we’ll focus primarily on the popular and highly-acclaimed SV and AR variants.

TL;DR: For its sheer robustness, weather-resistance, and durability, the Alpha series takes the crown, specifically the SV. That said, the Beta line offers more versatile and lightweight options, making it a better alternative for those seeking a general purpose jacket at a lower price point. In this case, the Beta AR really shines.

What’s in a Name?

Arc’teryx uses a brilliant naming scheme to functionally identify many of its products. It’s a practice that allows buyers to quickly determine the precise utility of any model in their pantheon of outerwear.

According to the Arc’teryx naming guide, the Alpha product family is designed with alpine activities and climbing in mind. This means you can expect a high level of performance that stands up to the toughest environments. Of course, all that does come at a higher price point. Let’s quickly compare the Alpha line’s SV and AR variants. 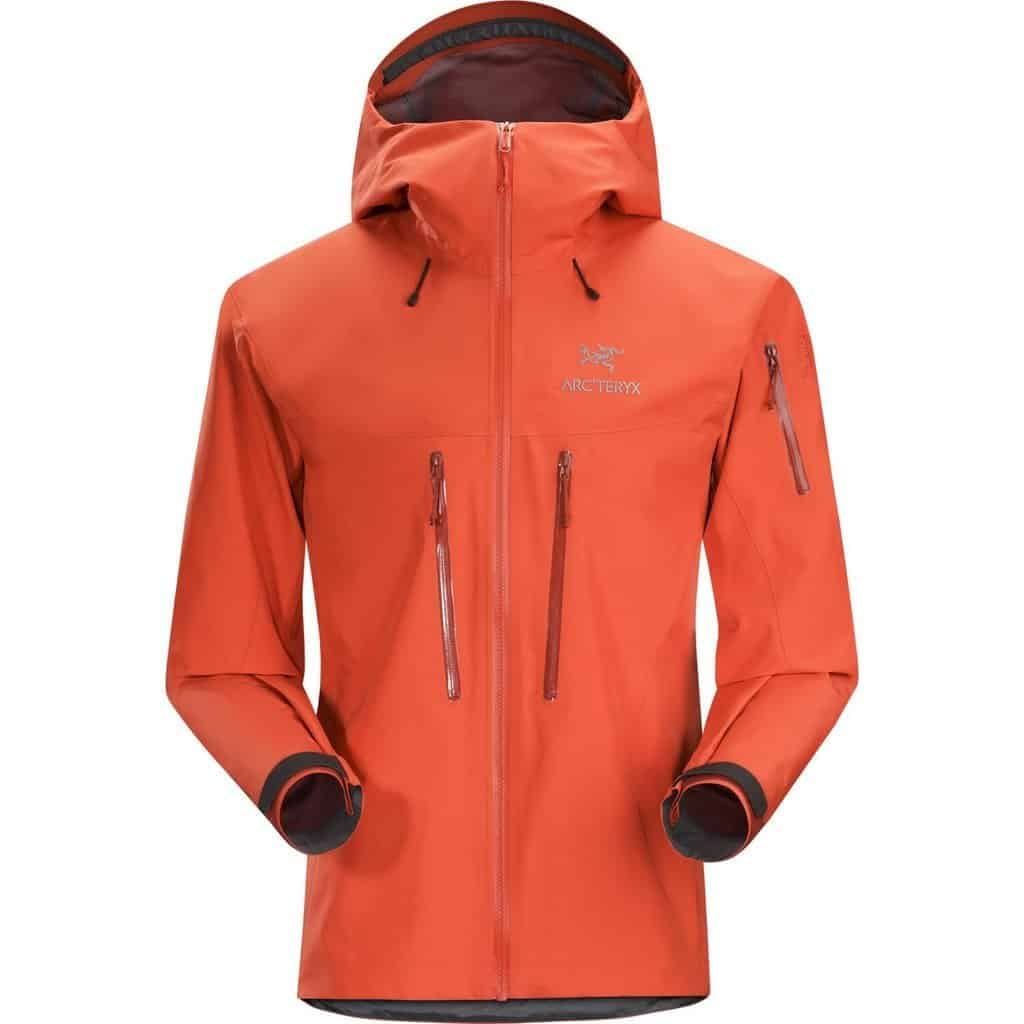 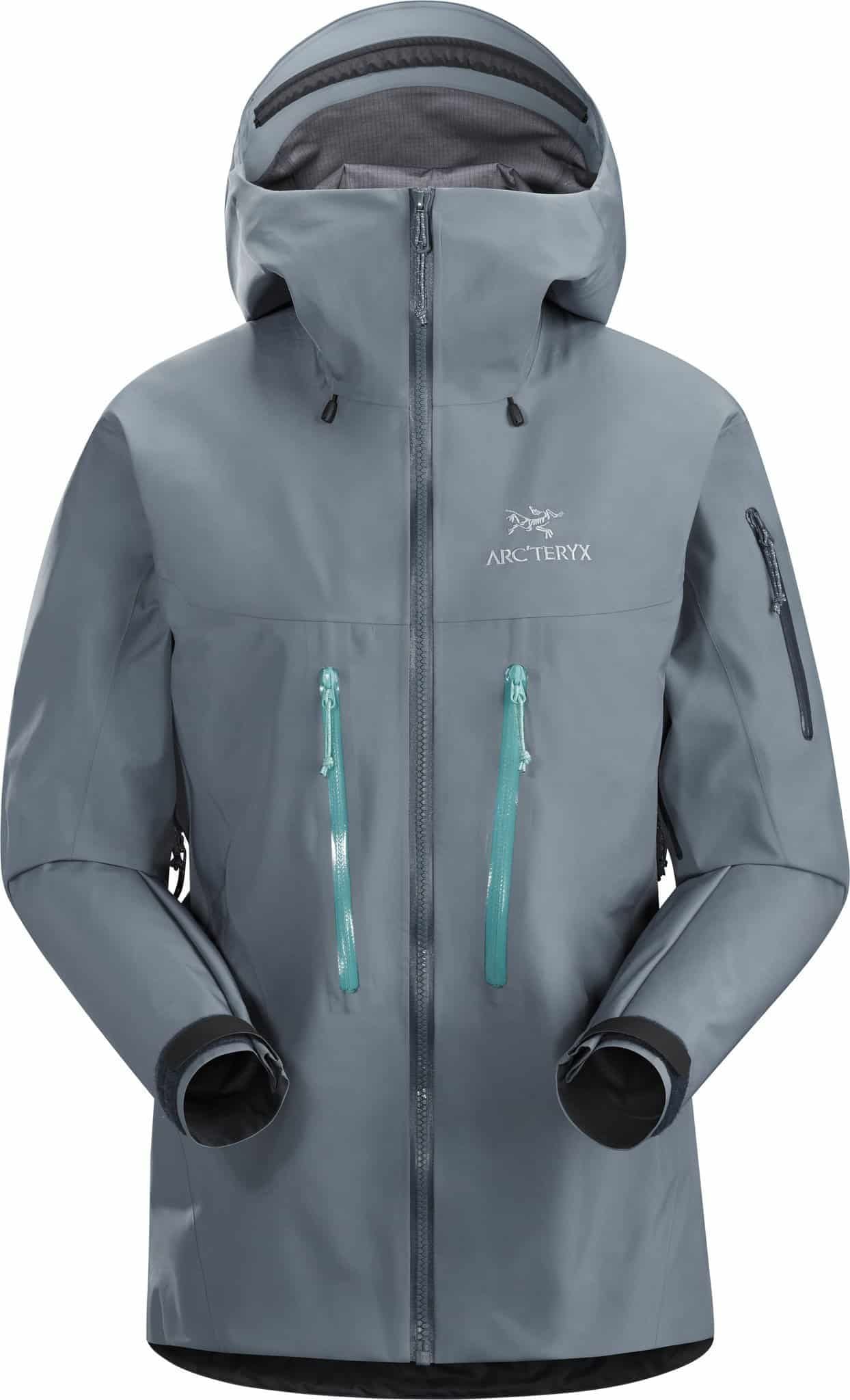 Alpha SV: A brand staple, the SV has been around for more than two decades. It’s the ultimate Arc’teryx hardshell, renowned for its durability and resilience against the elements. The lightweight, breathable design is a dependable choice for rock, ice, and alpine climbers. It weighs in at just an ounce over a pound (17.3 oz / 490 grams). 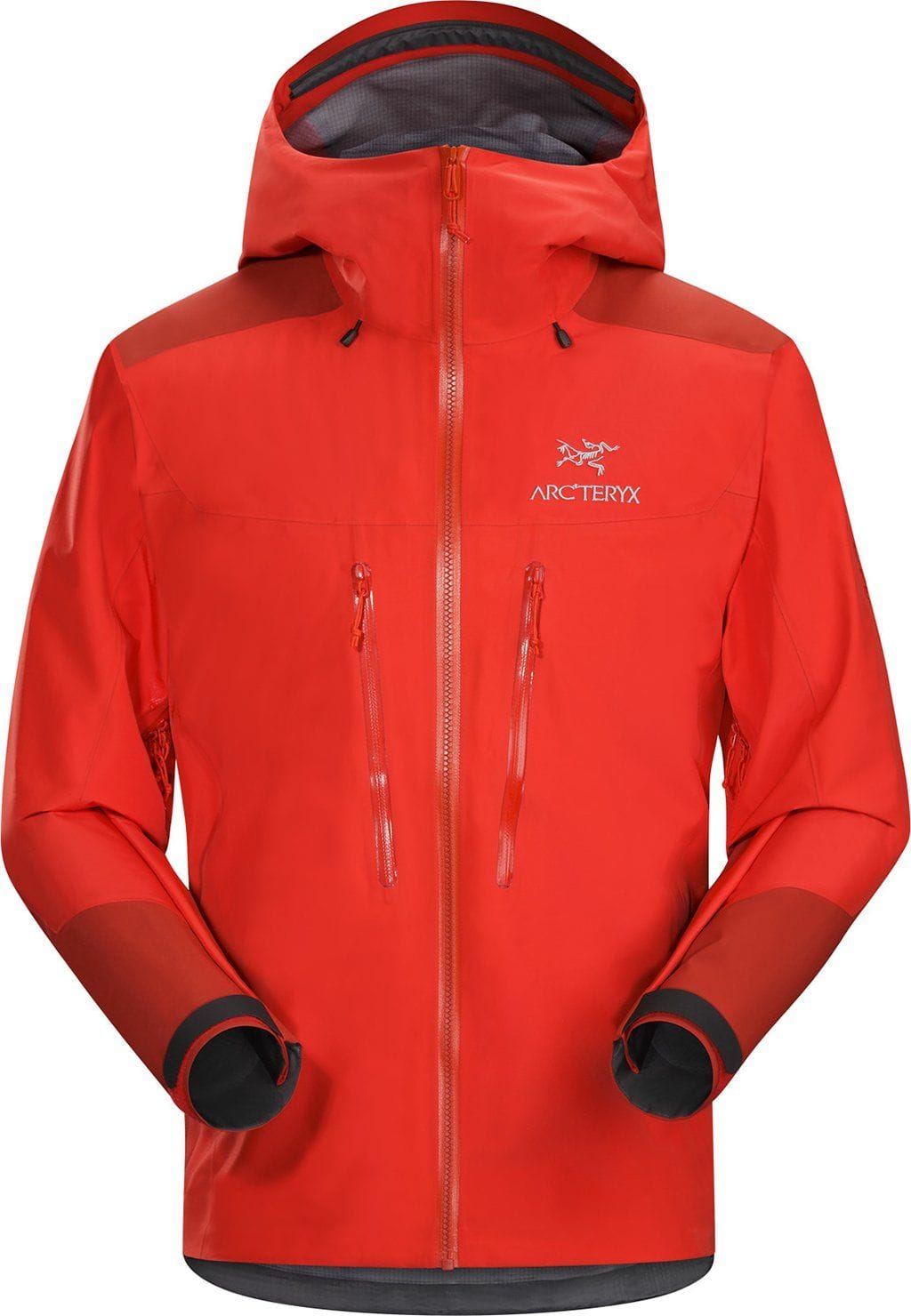 Alpha AR: Much like the SV, the AR is geared towards climbing and alpine activities. The major difference between these two is the number of pockets and durability of the face fabric, which is less abrasion-resistant on the AR. Nevertheless, the advantage of fewer pockets and thinner fabric is the weight-savings. At just 14.1 oz (400 grams), the AR is 3.2 oz (90 grams) lighter than the already lightweight SV.

The Beta series is designed to be maximally versatile for a wide range of conditions and activities. As such, the Beta is better suited to jack-of-all-trade types. Like the Alpha, the Beta is designed to stand up against tough climates, though perhaps not as tough as what you’d get with the Alpha line. 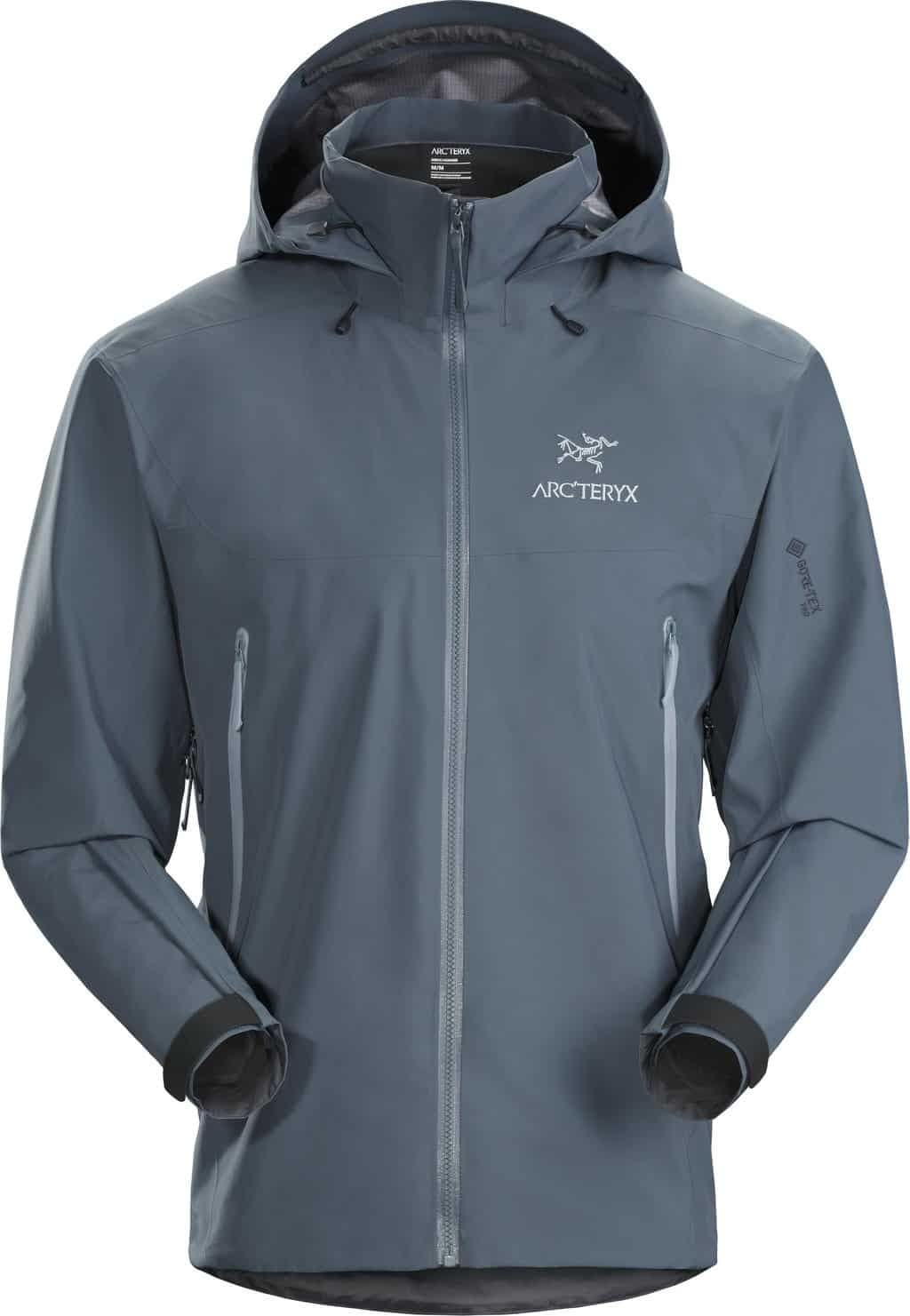 Beta AR: Similar in design to the Alpha AR, you’ll notice most of the differences hiding in the specs and the hood. Of the four jackets here listed, this is the only one to feature a DropHood in place of a StormHood (more on that below). It weighs just 1 lbs (485 grams) and is the lightest, most versatile, and affordable option among these top-notch hardshells. The Beta AR has been a fan-favorite since its debut in 2000. 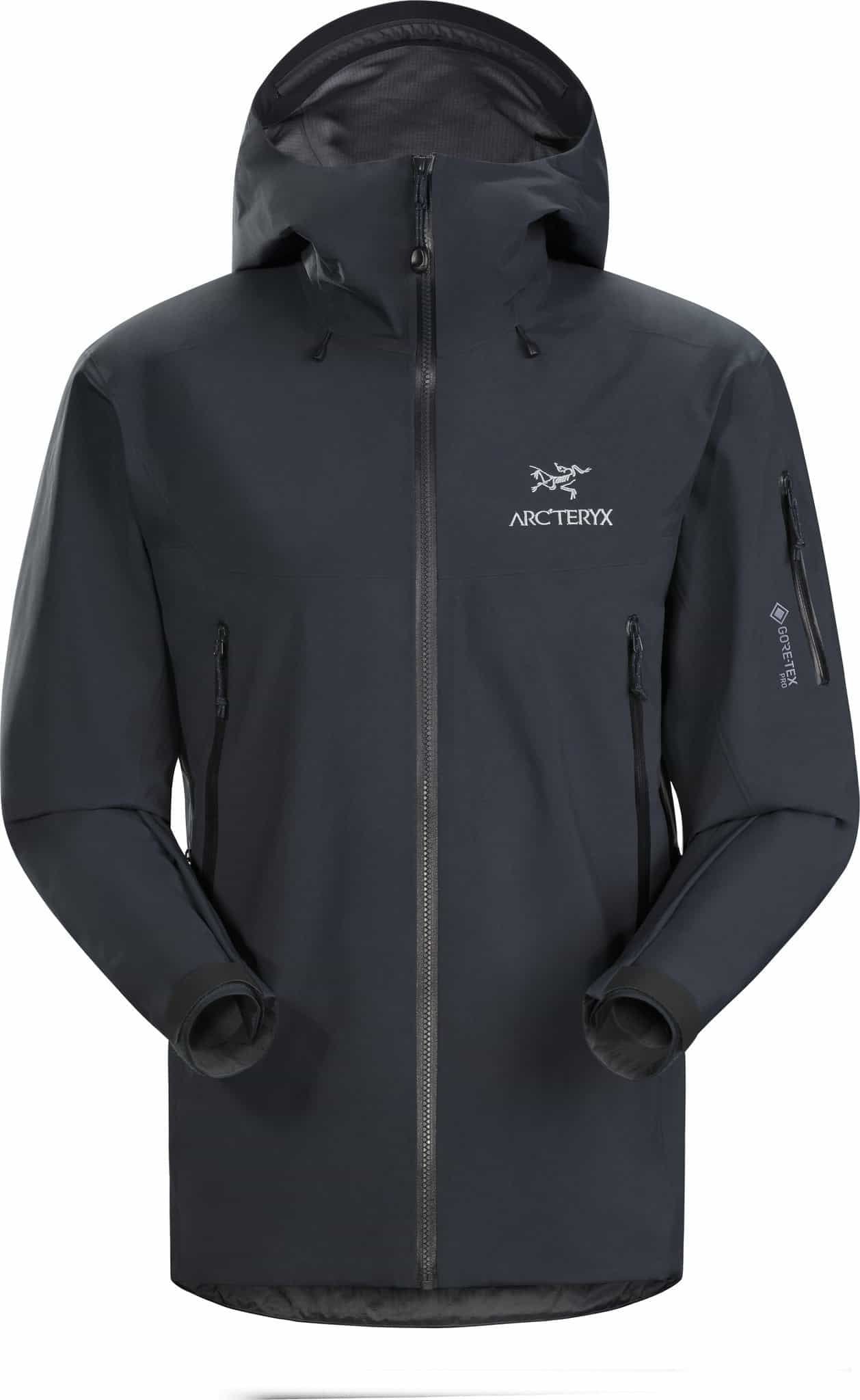 Beta SV: The Beta SV sits somewhere between the Alpha SV and Alpha AR in terms of durability, breathability, and weather-resistance. It’s versatile enough to be used in a range of situations, yet specific enough to be used on climbing or alpine expeditions. It weighs 1.1 lbs.

Comparing the Alpha and the Beta

Let’s take a look at the seven key metrics.

The Alpha SV, Alpha AR, and Beta SV are constructed with a plain weave, while the Beta AR is made with a ripstop weave. Both have their advantages. The former is softer and better at beading water, since its smooth surface allows water to flow off easily. The latter increases the jacket’s overall durability by adding an extra dimension of tear-resistance.

Besides the 3 backing layers of weather-resistant GORE-TEX Pro, all four models have been treated with a water-repellent finish. The Alpha SV, Beta SV, and Beta AR all have a DWR coating, while the Alpha AR utilizes Arc’teryx in-house Nu Water Repellent Treatment.

The Alpha SV has a breathable face fabric made from 100D nylon plain weave and is backed by three layers of GORE-TEX Pro. The Alpha AR is also backed by 3L GORE-TEX Pro, but has a slightly less robust 40D face. High-friction areas are reinforced with 80D plain weave. This means the AR will be lighter and more breathable than the SV, though also less durable and less weather-resistant.

Though all four models are considered regular fit, the Beta series is a tad more spacious, making it a better option for layering. All models run hip length and feature VELCRO cuffs. Cinchable drawstrings along the hem, hood, and neck allow for a snugger fit.

The Alpha SV, Alpha AR, and Beta SV all feature a StormHood, while the Beta AR features a DropHood. Both hood types are helmet-compatible and feature adjustable pulleys on the collar and behind the hood. The only real difference is that the DropHood has a shorter collar than the StormHood.

The StormHood’s high collar does offer more protection in bad weather, but the DropHood is more comfortable when worn on its own. Moreover, insulating midlayers won’t nest as well beneath the DropHood due to its snugger fit.

Want to quickly differentiate between an Alpha and a Beta jacket? Look at the pockets. The Alphas are easily recognized by their more centrally placed hand pockets, while the pockets on the Betas are placed in the more traditional location along the ribs.

Both the Alpha AR and Beta AR have three pockets: two spacious zip pockets on the outside, and one internal security pocket. The Alpha SV and Beta SV have those same three pockets, in addition to one inside mesh dump pocket and a left zippered bicep pocket.

If you’re prone to carrying a lot of items, the Alpha SV and Beta SV offer a better storage solution than their AR counterparts.

All Alpha and Beta zippers are WaterTight with Rain Shield (RS) sliders to ensure fully water-resistant closure. This applies to all pocket zips, front zips, and pit-zips. The pit-zips, which are standard across all four models, are an essential way to improve ventilation.

Because Arc’teryx introduces new iterations of their jackets on a yearly basis, you can usually find the previous year’s models and colours for discounted prices. Check out the Arc’teryx jacket section on The Last Hunt for excellent deals.

Chest Pocket: The chest pockets on the Alpha line are located slightly higher and closer to the midline than those found on Beta. This gives climbers unobstructed access to their pockets while wearing a harness. It’s also useful for those wearing a backpack hipbelt.

The one drawback is that the Alpha pockets are only reachable by crossbody access, as opposed to the more convenient same-side access on Beta models.

That said, these measurements are taken from the longest point at the center-back. That’s because all of them feature a drop tail hem that adds an extra inch to the jacket’s rear. This helps keep drafts out and butts dry.

Cohaesive Cord Lock Adjusters: An adjustable hem drawcord is essential to keep out drafts and prevent your jacket from riding up. Of course, on many jackets, they have a tendency to loosen over time, ultimately defeating the purpose.

Not so with the Alpha and Beta lines, which utilize their proprietary Cohaesive Cord Lock Adjusters to make cinching ergonomic and stable.

Beginning in 1995, Arc’teryx has worked intimately with GORE-TEX fabric technologies. Their partnership has produced some of the most waterproof, windproof, and breathable jackets in the outdoor gear world.

To one degree or another, all Arc’teryx jackets are waterproof. Depending on the activity, some people prefer less waterproof jackets, as they’re typically more breathable (think Beta SL Hybrid, a perfect trail-running hardshell). Add to this the fact that all their jackets are treated with a water-repellent finish. Always check the specs online or on the product tag for more information.

Is the Alpha SV worth it?

The Arc’teryx Alpha SV is not for everyone. It’s a top-rate alpine climbing shell, a brand masterpiece that’s been around since 1998 and is constantly being revamped. Today, it remains one of the best breathable-waterproof shells available.

On average, the Alpha SV takes twice as long to manufacture as any comparable shell on the market. Yes—the price is indeed high, but if your lifestyle demands the best quality and most dependable jacket, you’ll recognize the immense value of the beloved Alpha SV.

In terms of usability, materials, and performance, the Alpha series is our winner—specifically the Alpha SV. But, in many ways, that’s exactly what Arc’teryx intended; the Beta series is designed to be a more budget-friendly, versatile, and all-purpose jacket.

In the end, what matters isn’t which line is objectively superior, but which line meets your specific lifestyle needs. Whichever route you go, you won’t be disappointed. As any Arc’teryx jacket owner will tell you, these are lifelong companions that will see you through the nastiest weather and most memorable adventures.

Let’s recap with some final thoughts on each model:

Next, check out our review of the Arc’teryx Atom LT Hoody!

How to Pick a Hiking Backpack

In The Mountains With Rab: Technical Clothing For Extreme Conditions

The North Face Denali Fleece is Back

How to Pick a Hiking Backpack

In The Mountains With Rab: Technical Clothing For Extreme Conditions

The North Face Denali Fleece is Back