Helly Hansen is Ski Gear of the Pros: Outerwear Testing on Opening Day Powder at Fernie

An unexpected sight awaited us at the base of Fernie Alpine Resort—10 centimetres of snow covered the seats of the chairlift.

At our hotel in town the night before, the sound of falling rain had anxiously kept us up all night. The day before we’d flown all the way from Montreal to Calgary, then driven three-hours south to be at Fernie resort for opening day of the ski season. We planned to ride with professional ski patrollers and a young pro skier for Helly Hansen named Simon. Luckily, at the base of the resort that morning, the cold temperatures and elevation had turned the rain into fresh powder.

Being first in line for the season’s first chair is special—but it’s all that more special when you’re sharing the line with a local guide and professional skier. Our guide for the day was a Fernie ski patroller named Kevin, who we watched sweep snow off the seats of the rotating chairlift from the front of the line.

The lineup behind us grew steadily, and we could feel the excitement build. Skiers and boarders were yelling, laughing, and high-fiving. Riders just rows behind us cheered Kevin as he dusted off the last chair covered with powder in hypnotic movement of a broom. Suddenly the gates opened, signalling the start of season. We skied into the runway and got swept up by the first chair. The season’s first tracks were going to be ours.

The chair behind us was boarded by two more ski patrollers named Mike and Caroline, who were going to comb the mountain for avalanches before opening more terrain. At the top of the cloudy resort’s first lift, they radioed to announce the snowpack was stable. We could hear the cheers from the buzzing crowd hundreds of meters below.

Although the first tracks are just another day at the office for professionals like Kevin and his team, you could see from the smiles on their faces that these turns were special. And what a daily office Fernie Alpine Resort is.

The day before, we got to witness the beautiful mountain-scape of southern Alberta and British Columbia on the road to Fernie. Spectacular summits towered over the highway lined with spruce trees. The road felt like it meandered through endless mountains.

Fernie is like a little oasis surrounded by mountains. It’s a small town, founded back in 1898, and has a rustic vibe typical of the region. Main street looks like it’s out of an old Hollywood Western. Like other municipalities in the Kootenays, it’s also inhabited by a strong community of skiers, mountain bikers, and adventurers.

In the East Kootenay Mountains, the skiable terrain is imposing and wild. Resorts such as Fernie along with backcountry heli or snowcat operations are some of the best in North America. To ski this terrain during our trip, we borrowed local adventure guardians to make it as accessible as possible. And the West has some of the best Canadian Professional Ski Patrollers at their resorts, of which Kevin and his crew are proud members.

Ski patrollers are also among the most well-trained safety specialists on the mountain. They maintain the ski trails, monitor visitors, use avalanche prevention techniques, comb the terrain for hazards. To protect skiers, Kevin and his team have to protect themselves from the harsh, unforgiving elements. They rely on the best equipment—including the official Fernie Ski Resort Ski Patroller outerwear, which is supplied by Helly Hansen.

Among the skiers who joined us that day was 17 year-old Simon Hillis—a professional skier who had already starred in a renowned Warren Miller skiing film. Simon has been a pro for Helly Hansen for a few seasons, and he followed us to do what he does best—make the powder fly by carving turns on the snow.

At around noon, the chairlift set us down at the summit of the Timber Bowl. Up at 2000 metres, we were truly in the alpine, but we weren’t expecting the whiteout blizzard that greeted us. At the start of the season it felt deserted—like no-one had ever ventured this far before—and we could see only a few metres ahead. But the conditions didn’t deter Simon and Kevin’s crew of patrollers, who were chomping at the bit. Kevin’s team had just skied through to ensure the snow stability was safe.

We glided to the trees for improved visibility. A patroller undid a rope held by a bamboo fence and set off into the fresh snow. Simon then bravely raced down after him. For the crew, it was only our second run of the season.

After turning through the trees in knee-deep powder, we spied a Double Black Diamond run. The group unanimously decided to start the season strong, and we followed one of Kevin’s patrollers down the white, each of us getting lost in the mist of snow. As the terrain flattened, it was easier to spot the guide’s fluorescent Helly Hansen logo leading us single file to a thru-trail. 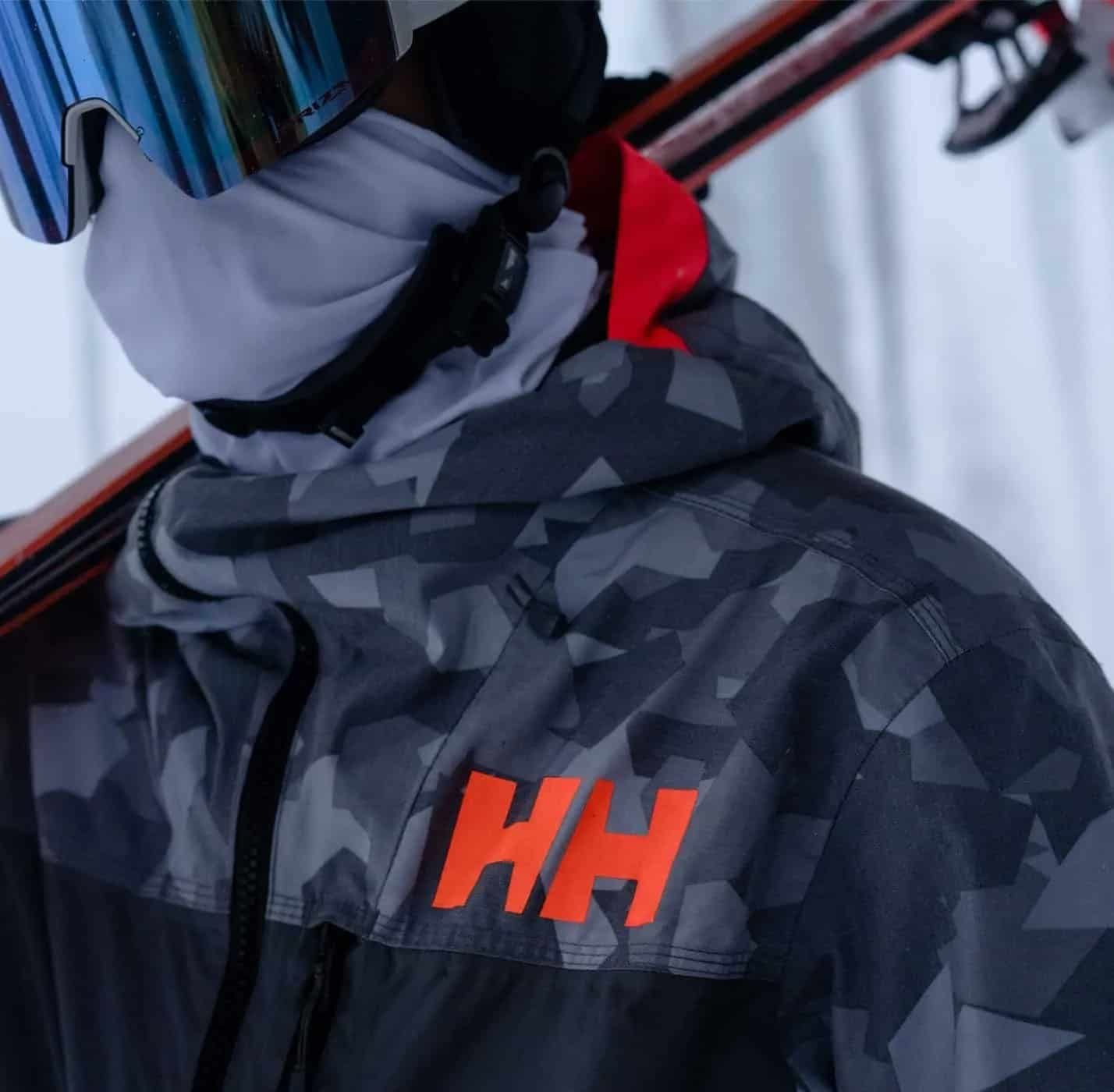 Skiing with local patrollers and a young pro definitely had its advantages. They know the mountains like the backs of their hands. To escape the endless fog, Kevin suggested we head further down the mountain to where visibility would likely be improved. Other skiers clamouring for the fresh snow above hadn’t figured the best turns were lower down on the resort

On another run, we once again found ourselves alone on a hidden face. Down a slope intersecting with another, Simon spied a natural jump and stopped above it, planning to catch some air. Before take off, Kevin and another patroller went to evaluate the landing spot to make sure it was free of trees and rocks, while we waited with Simon.

Kevin then signalled the jump landing was clear. We pulled our phones out of our Helly Hansen jacket Life Pockets, ready to catch Simon’s jump—which he launched thirty-plus feet into fresh snow. Yeah, we took a safety-first approach to the obstacle, but watching a pro like Simon boost air was wild.

Back at the chairlifts, Fernie Alpine Resort lifties were non-stop shoveling the snow off seats. Like the patrollers, they were also decked out in Helly Hansen. In fact, one glance at the lineup of skiers and it was astounding to see the number of people in Helly Hansen products.

On the chairlift ride, Kevin informed me that Fernie ski patrollers have a tight relationship with the brand. At the start of each ski season, Helly Hansen supplies Kevin’s team with gear—new jackets, base layers, gloves, mitts, and pants—specially designed for professional patrollers. At the end of the season, Kevin and other patroller managers gather feedback from their ski teams and sends it to Helly Hansen. The result is consistent innovation that helps the brand cater to their customers, ski patrollers, and pro riders like Simon.

Back at the cloudy summit, we couldn’t see a thing, but we didn’t let the whiteout conditions deter our skiing. Kevin once again led us to a part of the resort only the locals know. Once more we followed tracks in ever-deepening snow.

We finally stopped when Kevin yelled, ‘Wow, you’d think the Griz was passing through here!’ Thinking he meant an actual grizzly bear, our group shot each other nervous glances. ‘Just kidding,’ he laughed. Another ski patroller explained that the spirit of Fernie mountain is nicknamed ‘Griz’ and brings snow—or not. On that day, Kevin had to give Griz his due. 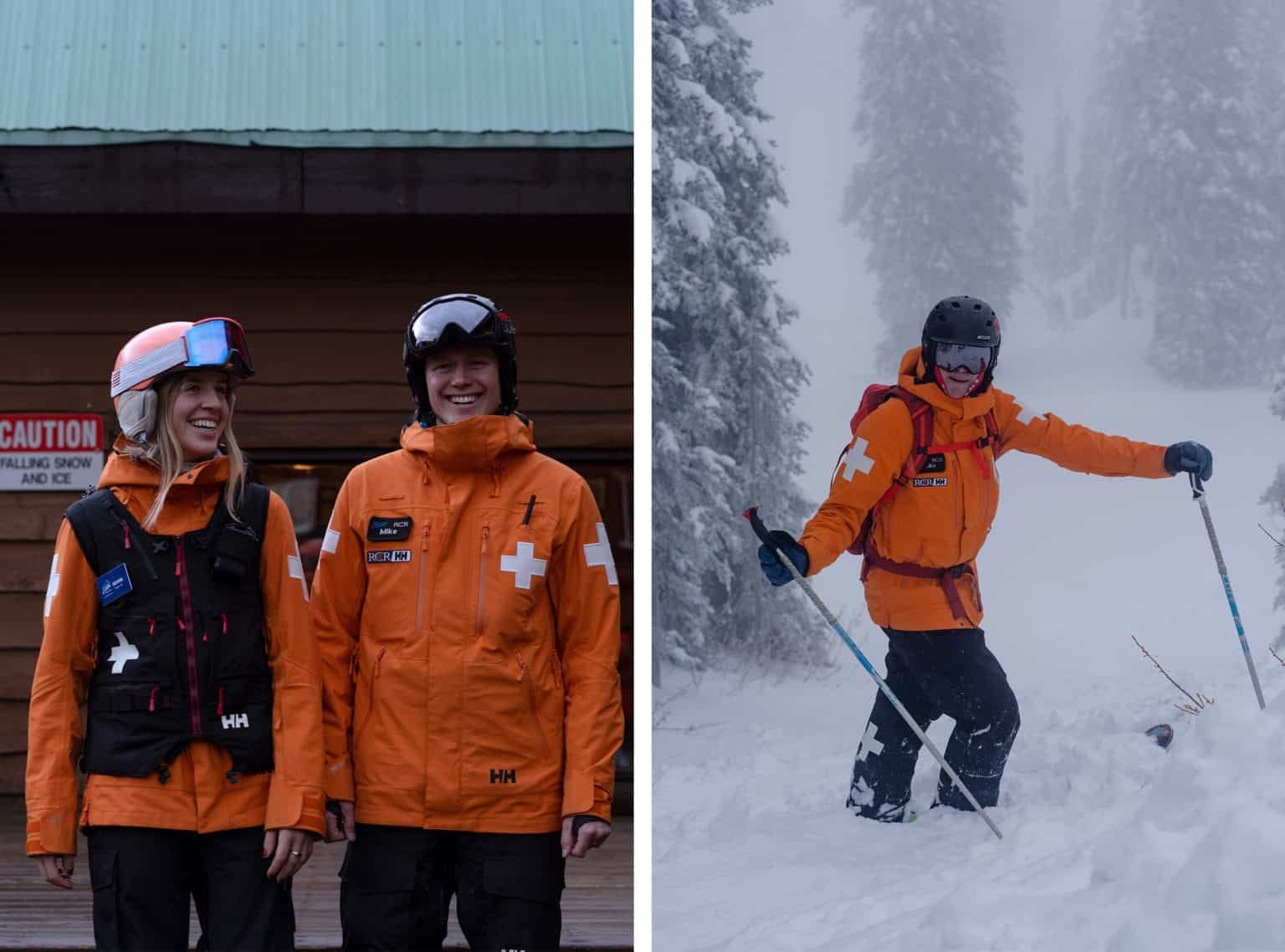 The descent looked promising, but then the patroller’s radios started squawking with a voice that announced that an injured skier was caught in a tree below. Instead of taking easy turns, we raced down the powdery slope as quickly as possible. At the bottom, one of the patrollers hopped on a ski-doo and disappeared into the mists.

When you’re in charge of safety on the mountain, duty calls.

The day ended with an apres-ski in an ice bar—a Fernie tradition—where we slipped into Helly Hansen parkas loaned to visitors for the occasion. After a few beverages, we couldn’t tell if it was the parkas or drinks that were keeping us warm. Whatever it was, we felt snug and warm surrounded by walls of ice.

After an opening day of skiing the mountain with professionals like Simon and Kevin, it was nice to experience the conversation of individuals who turned their passions into careers. We talked about skiing, crazy backcountry experiences, the rigorous training of patrollers, and what life was like in Western Canadian ski towns.

One thing we didn’t touch on was the outerwear we rode-in all day. But that’s because gear like what Helly Hansen supplied, is only spoken of if you feel wet and cold. And we were dry, warm, and comfortable throughout opening day at Fernie—the way you’re supposed to feel on a powder day.