Packs & Travel > Of Sligo: an Irishman’s Trip to the West Coast of Ireland

Packs & Travel > Of Sligo: an Irishman’s Trip to the West Coast of Ireland

The multi-lane motorways fade to country roads the farther you get away from Dublin. Crossing the country from the calm, black waters of the Irish Sea on the east coast to the roaring Atlantic Ocean on the west coast only takes 2 ½ hours or a short 180km drive. Ireland is a postage stamp of a country.

The west coast of Ireland has been reinvigorated in the past few years thanks to The Wild Atlantic Way. This 2,500km coastal road touches three sides of Ireland from Malin Head, Ireland’s most northern point, all along the west coast and on to Kinsale on the south coast. The Cliffs of Moher, the vibrant, musical city of Galway and the epicurean haven that is West Cork are just a taste of what this part of the world, and road, has to offer. With a population of around 19,000 people, Sligo town has a reputation beyond its size thanks to The Wild Atlantic Way and world-class surfing on the nearby beaches.

The roads cross country follow the natural hills and flow of the land. Bobbing up the climbs and tucking around the curves. The border between Ireland and Northern Ireland, a much more recent and man-made geographical feature, cuts through this part of the land. As the road dances between the two countries the only indicators of international travel are the postboxes switching from green to red, and the speed limit signs swapping kilometres per hour for miles.

The clouds hung low as I came into Sligo, so thick and heavy, I could almost reach out and touch them. It was one of those dark mornings where it seemed like the day would never wake up. The town of Sligo has been here, in one form or another, since the Bronze Age. Its name in Irish, Sligeach, directly translates to ‘shelly place’. Initially settled for its abundance of shellfish, Sligo grew into a port town. The town grew to such a size that it was even included on a map of Ireland drawn by the Greek geographer Ptolemy in 140 AD. Ever since it was first settled, Sligo and it’s people have existed alongside, and as part of, the environment.

The town is split in two by the River Garavogue, linking the centre of town with the sea. On the southern bank sits ‘Shoot The Crows’, a pure and true Irish pub. When the pub first opened under a different original name, farming was by far the dominant industry in the area. Crows were a big problem, pecking at seeds and pulling up crops. There was a bounty issued for every crow, to be paid once a week to anyone with a dead crow in hand. Being paid once a week wasn’t enough for the people of Sligo though, as it left them with no money for a pint or a whiskey during the week. The owner of the pub began to take the dead crows in lieu of payment for drinks and collected the money himself a few days later, earning the pub its name. 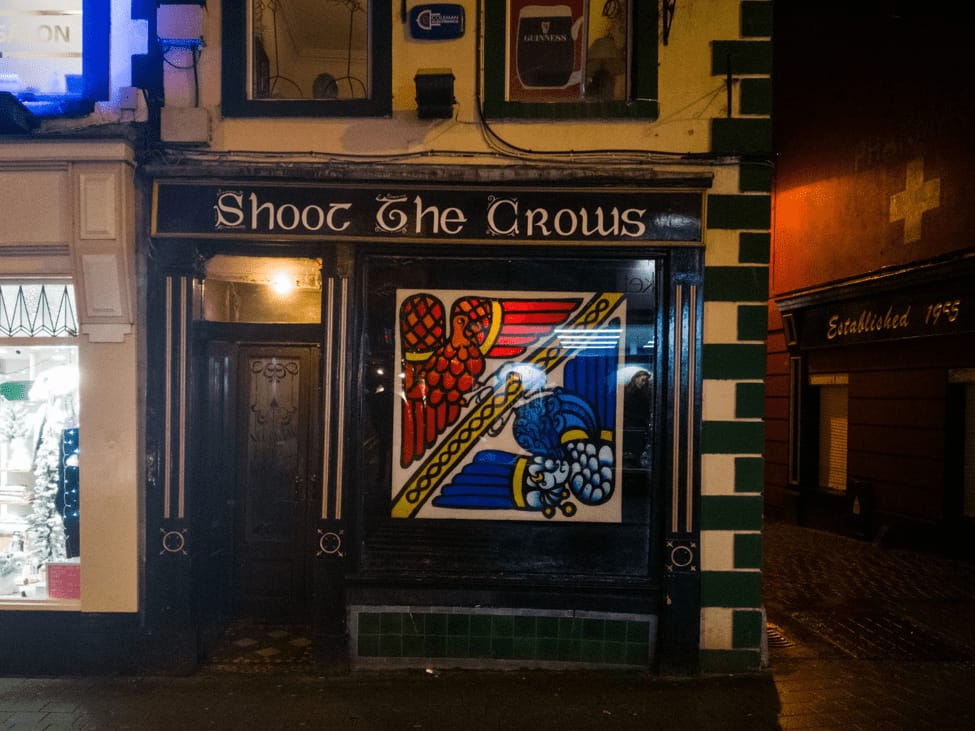 There are no TVs here, only the whisper of music and overflowing pockets of chats. The wooden beams of the low roof swoop and droop even further as you walk through to the back of the pub. The cold, cracked tile floor is warmed by an open fire and the windows are so small that heat can’t escape. The pub was, and still is, a much-needed shelter from the weather for the people of Sligo—this is the type of cold that makes your bones feel wet. 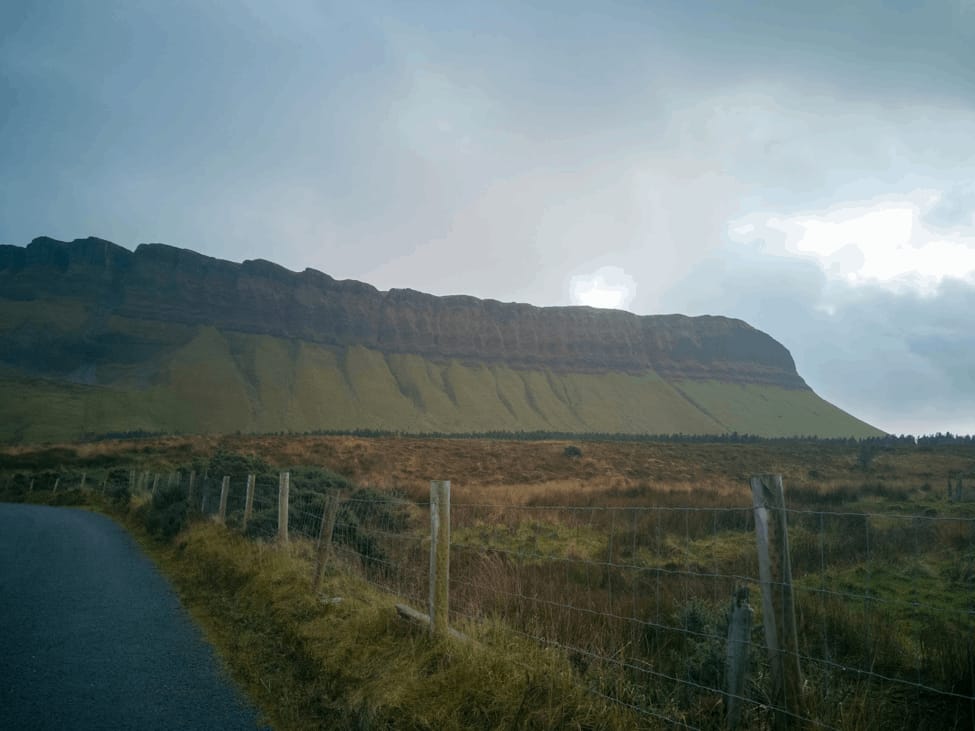 On the edge of town sits Benbulben. And it dominates the landscape. This otherworldly mountain starkly contrasts the flat land around it as it surges up from the ground. Its edges seem to have been sliced away, with large claw marks scarring the side of the hill. The near-vertical structure towers above the land and keeps its people living in its shadow, protecting them from the wild and the winds of the north. Benbulben holds onto clouds passing by, keeping the whole area under a blanket of protection.

As morning passes, punches of blue and brightness have battled their way through the clouds, lighting up the land below. Sheep freely graze at the base of the mountain. The only way to know who owns these sheep is to decipher the hieroglyphic-like markings spray-painted on them. Each farmer has unique markings for their animals. A red spot on the back right hip for one farmer, a blue streak down the spine for another. 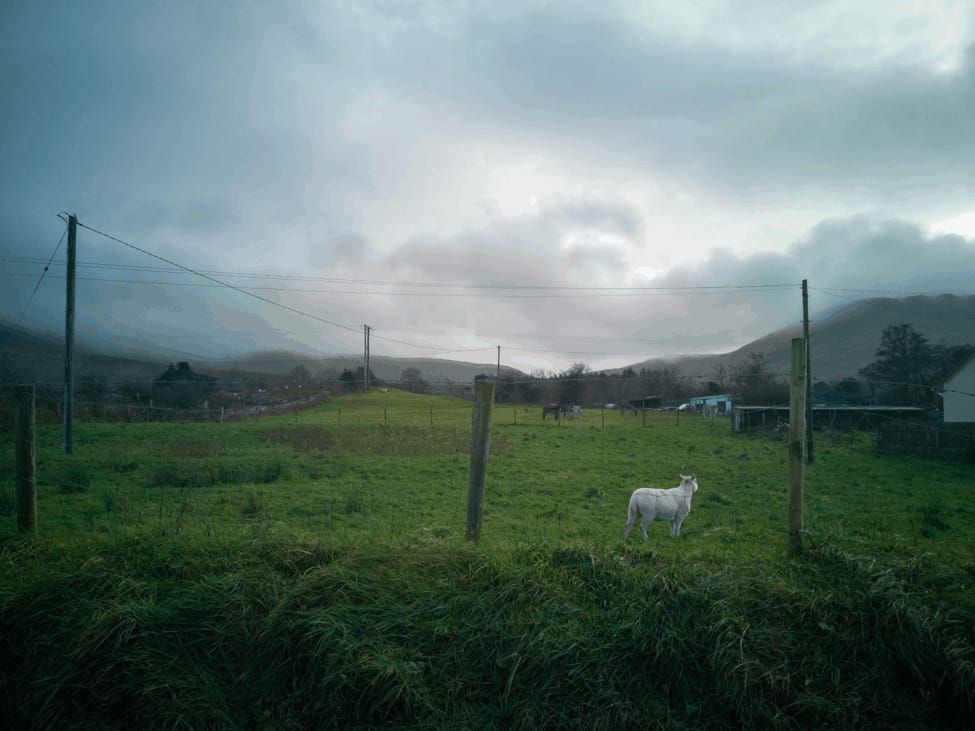 Benbulben is made from the very same thing that gives Sligo its name – shells. Layers and layers of limestone made from shells have been compressed for millions of years under the sea and formed during the Ice Age. The 320 million-year-old rocks have risen up from the sea bed, becoming the mountain that now stands above and watches over its people and land. Since humans first came to the area Benbulben has played a part in Irish history. In Celtic mythology, the mountain was home to wild hunts, fierce battles and is the supposed final resting place of two Irish legends, Diarmuid and Gráinne. In more recent times, Benbulben has inspired the works of WB Yeats, one of Ireland’s greatest poets. Yeats is buried at the foot of Benbulben in Drumcliffe Churchyard, with the area being known as Yeats Country.

This hidden corner of Ireland is dominated more so by the sea than anything else. The Atlantic Ocean is a wild animal. When it’s calm it sits quietly, glistening in the sun and playfully exploring the shoreline. But when it rears its head and bucks its legs, its waves rise high above the land and, whipped by winds, it rips chunks out of the land. With each wave louder, heavier and darker than the last, it’s easy to see who, or what, is the alpha in this part of the world. Like the small remora fish that feed off and clean the shark that they’re attached to, the people of Sligo and Mullaghmore have a similar symbiotic relationship with the sea. 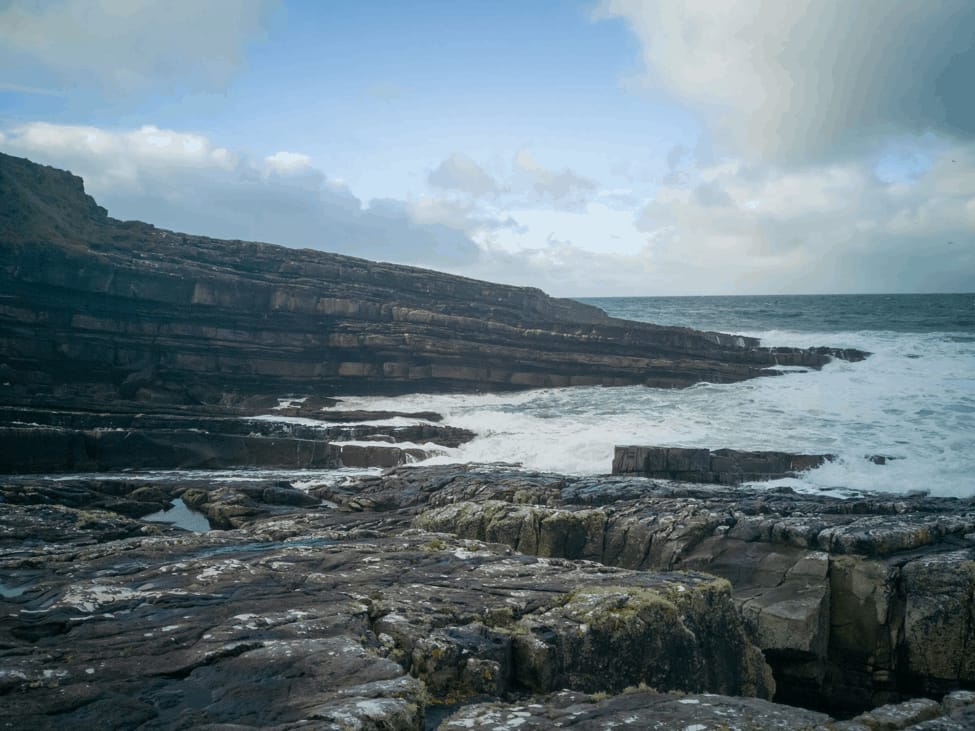 For hundreds of years this region of Ireland has been dotted with ports and harbours. Sailors from across Europe and Africa came here to trade. The sleepy town of Mullaghmore still has an active port with family-owned boats heading out to sea on a daily basis. Generations of experience has allowed these people to master this part of the ocean. Not everyone can successfully navigate these waters.

In September 1588 the mighty Spanish Armada attempted to invade England. After a tough battle, the Spanish tried to escape by fleeing to the waters off the west coast of Ireland. The beast was in a particularly angry mood that day and drove three of their ships into the rocky ocean floor near Mullaghmore Head, a final resting place for 1,800 Spanish sailors. 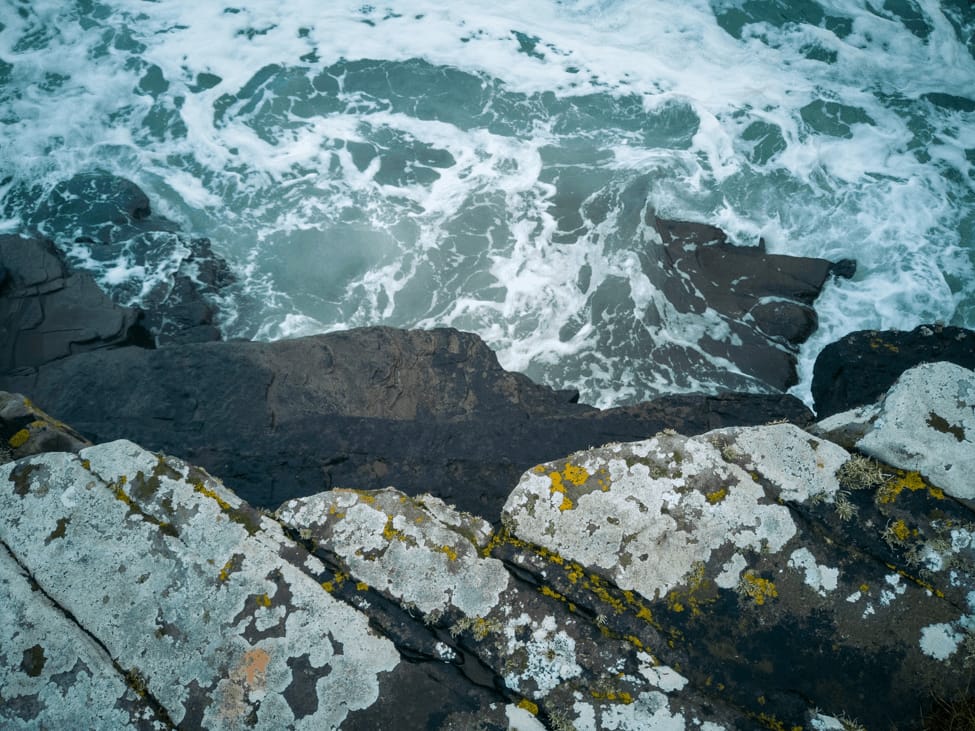 Nowadays, this part of Ireland and particularly Mullaghmore Head is known as having some of the best big-wave and cold-water surfing in the world. It takes a certain type of person to get into the water here. This is not Bali. This is not Byron Bay. This is the Atlantic. Thick, full-length wetsuits are mandatory regardless of the time of year. Hoods and boots are preferred by most as well. Before you even get into the water the wind has whipped your face, making your skin feel two inches thick. Once in the water, the cold grows through your body. Diving under, the dark green surface quickly gives way to brown and then the darkness takes over. Visibility is nearly non-existent.

The waves here are infamous. Heavy, huge and brutal. When a large swell comes through, Mullaghmore Head is only for elite surfers. With 30ft tall waves, surfing here becomes an act of survival more than anything else. As the surfer is towed in on a jetski, the wave picks them up and begins to grow, spit and barrel. This quickly encases the surfer in an icy-cold tube of emerald green and, hopefully, spits them out on the other side. Surfers need to be rescued by the jet ski as quickly as possible, or risk going the way of the Spanish Armada. 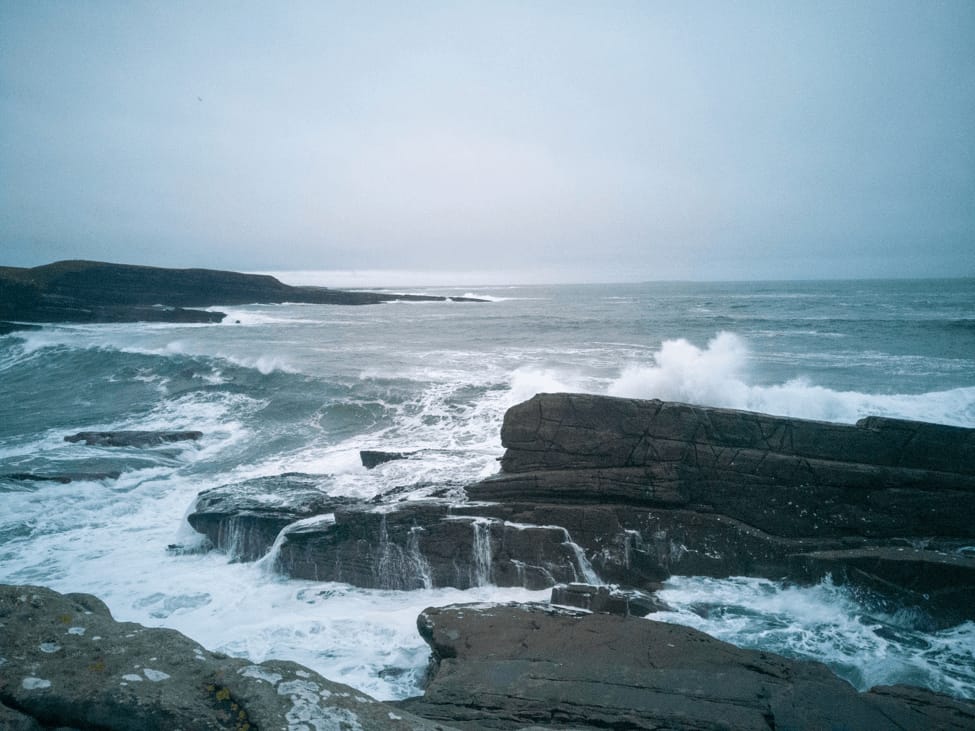 The coast shows the scars of a life alongside the Atlantic. Brittle limestone is no match for its never-ending barrage of waves. With the coastline’s cliffs and rocks eventually growing tired of the battle, they give up and succumb to the sea.

Sligo has been defined by its people’s direct reaction to the landscape. They’ve lived with it and it has become part of them, for generations and through the ages. Benbulben gives them their identity and protection. Nature and animals have shaped their way of life and culture to the environment. And the Atlantic has made them tough, resourceful, and has put this little snippet of rural Irish coast on the world map.

To keep myself dry on my trip to Sligo I wore an Arc’teryx Beta AR Jacket because of its tried-and-tested three-layer GORE-TEX Pro construction. My Patagonia Nano Puff Jacket kept me warm on cold mornings and was easily packed away when I didn’t need it.

A versatile pair of pants like The North Face Motion Pants are great on a trip like this. Durable enough for hiking and stylish enough for the pub afterwards. Blundstone 1478 Boots are great for most trips outdoors and exploring Sligo was no different. 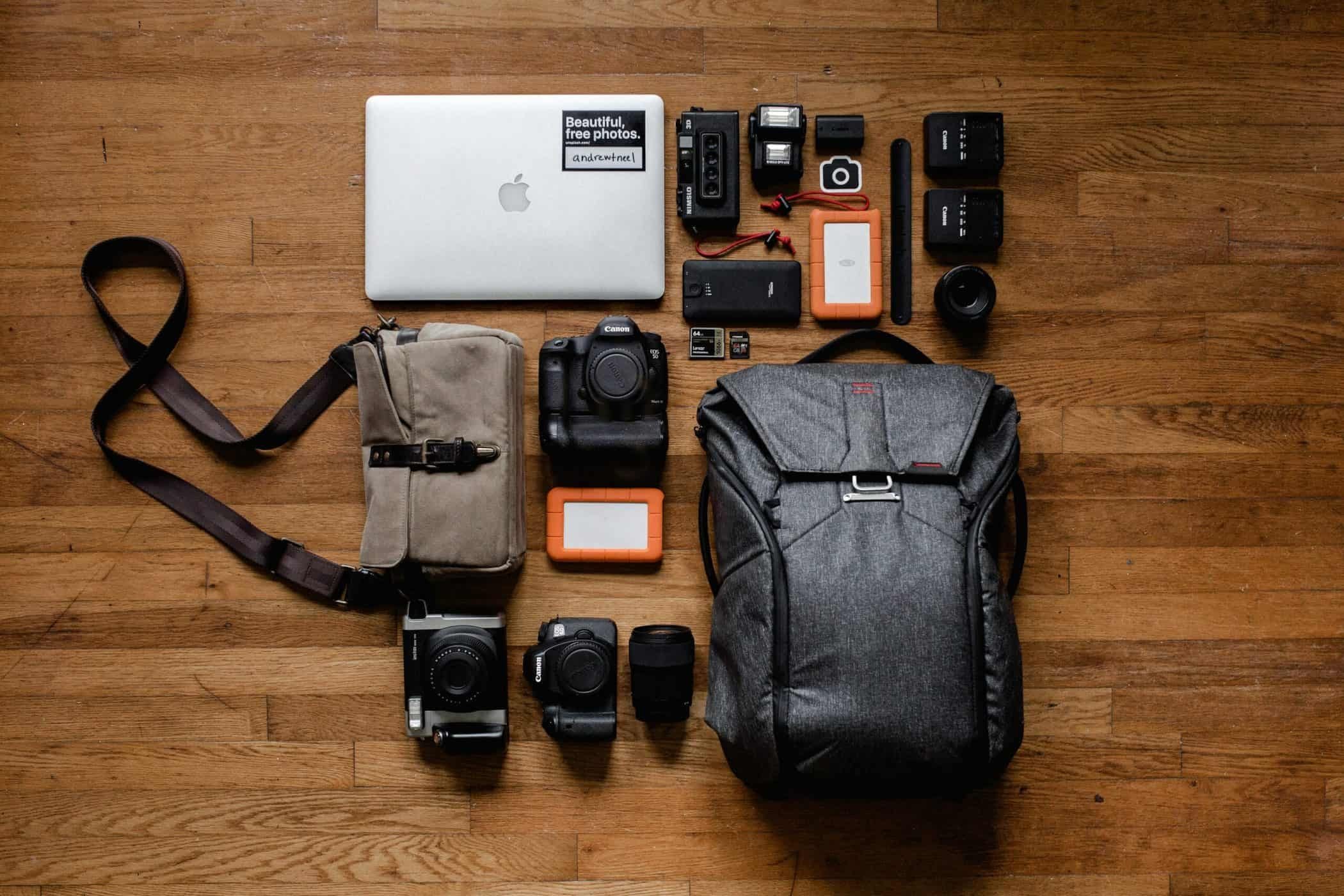 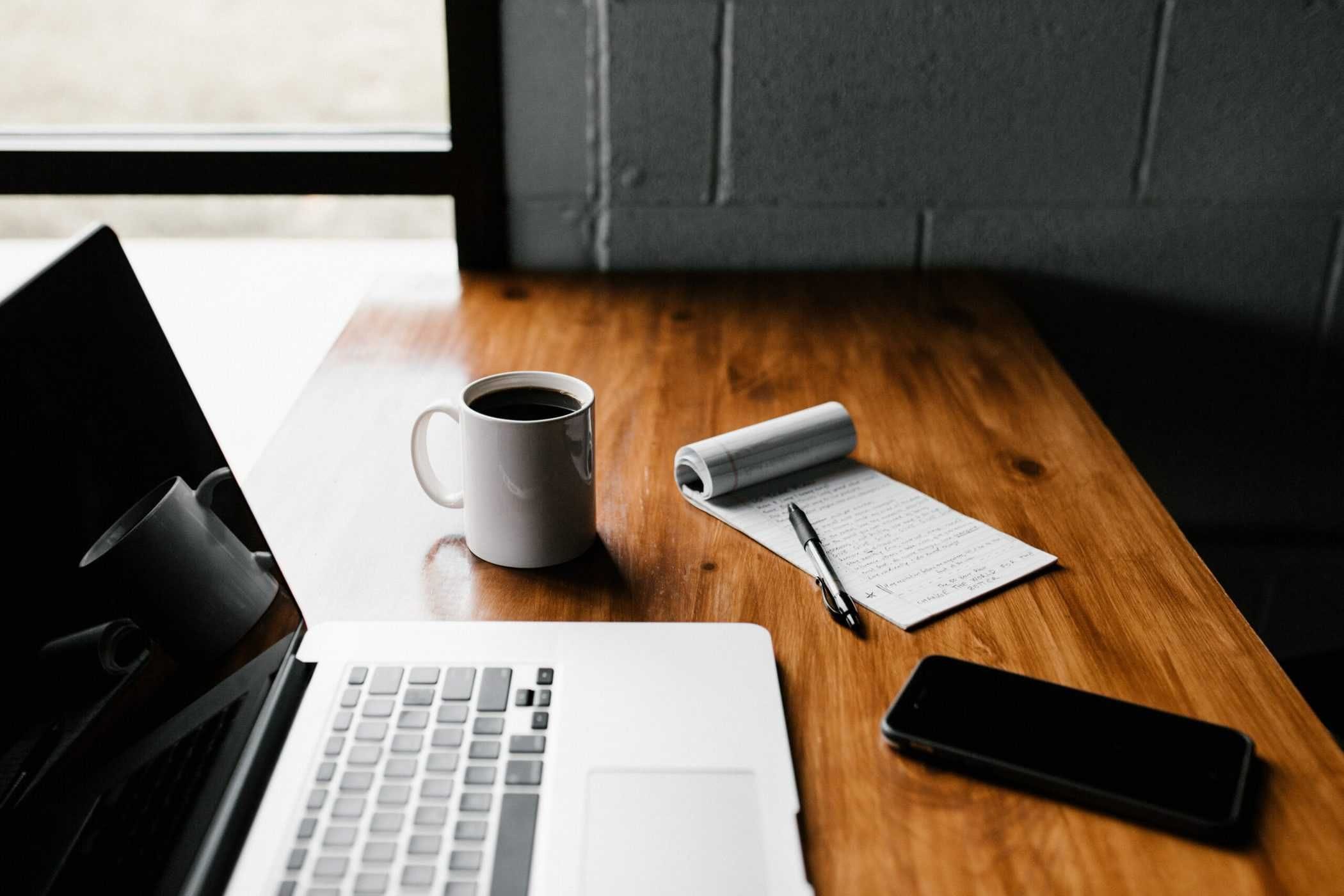 There are 4 thoughts on this article titled “Of Sligo: an Irishman’s Trip to the West Coast of Ireland”.

Beautiful, so nice to see in our mid and view our home land. My family from Clair brides from Rosscomin.love neighboring Mayo. Ah but Sligo!

Having grown up there in Sligo I thought you described it well.
I’m due a trip back there soon as COVID-19 is under control, I’ve been living in Chicago for the last 36 years.

So great to read this article, being a proud Sligo woman. Wonderful to see it being promoted in Canada..